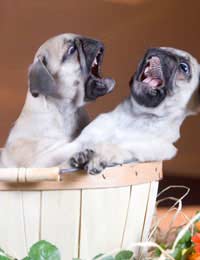 When animal fights occur they are often sudden and without warning at least to the perspective of their human owners. It’s hard to watch your loving pet with teeth bared, in combat with another animal, without jumping in and breaking them apart. But as this can result in serious injury to the owner, breaking up animal fights without harm requires a calm head and some knowledge on how to handle the situation correctly.

It’s Not as Bad as it Looks

As severe as many animal fights look, children and parents alike need to realise that much the actual fighting looks far more severe than it is. The natural survival instinct of animals prevents a fight from becoming too serious as in the wild deep wounds mean possible death. A good part of the actual fight, the horrible cat yowls and threatening dog growls, is actually a show of force rather than a true menace. The bites and cuts are usually shallow wounds that are easily cleaned and treated. So don’t panic.

Kids, What Not to Do

It’s upsetting to see pets fight and the first instinct is often to shout at the animals to stop. But screaming at fighting animals only worsens the situation as the animals react off the fear and tension in your voice, so stay calm. This next part is very, very important. NEVER try to separate fighting animals with your bare hands. Your pet’s skin is protected by fur, yours is not and you can be hurt very easily by sharp claws and teeth. When pets are in fight mode, they are not aware of you as their beloved owners and can accidentally cause you pain without meaning to. Instead, go and get an adult to help stop the fight. If there are no adults around, here are some ways to safely stop a fight.

These are some recommendations to stop fights between every kind of pet but dogs. Dog fights are more serious and dangerous; they will be covered in a different section of this article.

Out of all pet fights, dogfights are the ones most physically dangerous for pet owners to stop. In a fight ANY interference is perceived as another attacker in the heat of the moment and sometimes people are hurt unwittingly by their own dogs. Owners must realise that there is no truly safe way to intervene, but here is a good method to break up a dogfight if dumping water on them doesn’t work.

It’s best to have two people involved and do a ‘wheelbarrow manoeuvre’ on both animals. Grab the dogs by their hind legs and turn them in a circular motion away from each other, dragging backwards at the same time. Always keep the dog moving with its hind legs held high up so it can’t turn around and bite you, as it will need to continue sidestepping with its front feet to keep from falling over. Don’t let go until you can get the dogs separated from one another by a door, gate, fence, etc or they will simply start fighting again. If you are by yourself, use this method on the aggressor or, if you have a leash with you, loop the leash around the aggressor’s hind legs and lift to minimise the chance of being bitten. If the second dog tries to attack the dog you have lifted by the hind legs, keep dragging the first dog away until you can attach it to something with the leash, then go and grab the second dog by the hind legs and use the same method.

However, unless things look serious, it’s safest to let animals fight without interfering personally. This is particularly poignant with children.

What to Do if Your Pet is Stolen