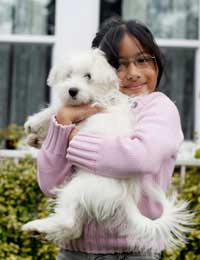 There is a steadily growing problem of overpopulation among pets with overcrowded shelters and many families with space issues in their homes that leave them unable to care for entire litters of animals. This makes spaying or neutering the family pet a responsible, practical choice.

The Objections of Children

The thought of surgery on a beloved family pet is enough to bring many children to tears and bouts of pleading for the parents not to go through with it. They may even get angry or resentful with parents for what they consider bringing harm to the pet. But in reality, it’s harmful and irresponsible for owners NOT to spay or neuter unless they are planning to breed their pets. There are so many positive benefits to spaying or neutering an animal that your child doesn’t know about or doesn’t see, so sit down and talk about all the cause and effect results of leaving an animal un-neutered and they will soon come to realise what’s best for their pet.

Explain to children that if pets are not spayed or neutered, there is a much larger chance they will get into fights and become hurt in the process. Male dogs in particular are at a high risk of getting in fights with other un-neutered dogs while out on walks. This also reduces dominant behaviour, which means your kids are safer from bites and acts of aggression from your dog. In general, neutered pets are far calmer and less likely to bite than un-neutered animals. Also, in dogs and cats, an un-spayed or neutered animal has a greater chance of being hit by a car as they are much more prone to roaming or trying to get to another animal for mating purposes. Neutered pets are more responsive and obedient to training, which means they are safer from accidents as well.

Added Benefits of Spaying and Neutering

When to Spay or Neuter a Pet

Dogs, cats and rabbits can be spayed or neutered as young as about 4 months of age, and many vets advise no later than a year old if possible. This prevents development of the behavioural problems like household spraying and fighting, some of which can persist after the operation if it’s not done early enough. While small animals benefit from this surgery as well, it’s harder to find a vet who will perform spaying and neutering operations on pocket pets, as their smaller organs make it difficult and increase the possible mortality rate.

If your children are still unconvinced about the benefits of spaying or neutering the family pet, take them down to your local shelter and show them the problems that overpopulation causes when animals have too many litters for their owners to take care of. Neutering an animal doesn’t only benefit your family; it benefits your whole community by making the decision not to add to the problem of pet overpopulation.

Keeping a Pet During the Recession

What to do when your dog dies

What To Do if Your Pet is Overweight